HIGHER LAW: READINGS ON THE INFLUENCE OF CHRISTIAN THOUGHT IN ANGLO-AMERICAN LAW 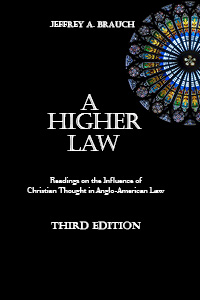 This third edition continues to further the quest to look beyond legal rules and institutions to the legal philosophies that shaped them. It includes excerpts from books, articles, and cases written by some of the greatest minds to have shaped our legal system. Several chapters have updated readings that address important cultural trends. For example, the discussion of human responsibility and criminal guilt includes a focus on the impact of post-traumatic stress disorder on large numbers of service members returning from Iraq and Afghanistan. Similarly, the chapter on critical race theory has been updated to highlight the debate on race relations that has occurred since the 2012 shooting of black teenager Trayvon Martin and the beginning of the Black Lives Matter movement. Rights—whether constitutional or human—play a bigger role than ever in public discussion and in courtrooms. Thus, coverage of such rights has grown to include recent and high-profile cases. Finally, one chapter is wholly new, containing readings from a wide variety of perspectives on the use of biotechnologies that can alter the human genome for generations to come.