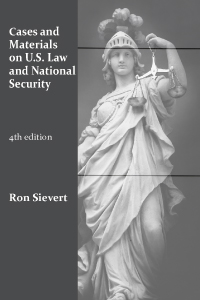 The book highlights the basic fundamentals of National Security and Homeland Security Law for law students, attorneys, and master’s students who will actually be practicing in the area or handling national security cases. Its selection of materials focuses those which inform the concrete daily problems confronted by agents and line attorneys handling national security cases in order to help those who might have to draft or approve a request for a search, wiretap, or complex indictment; or interrogate a subject, initiate a foreign search, arrest and extradite a suspect, and coordinate with both the military and intelligence communities. Government and private attorneys also have to navigate the complex new law related to transponders, cell site simulators, cell phones, personal computers, and drones. Finally, the last section on Congressional versus Presidential war powers covers an important area, still unsettled, whose underlying tenets should be understood by all potential American leaders.

The title first reviews famous cases such as the Rosenberg’s prosecution, the Pentagon Papers, and Embassy bombing and additional Al Qaeda terrorist cases, which cover the key elements behind the offenses of Treason, Espionage, Export Control, and Terrorism prosecutions. It then examines in depth domestic and foreign electronic wire interception and search and seizure, including the latest Supreme Court cases. It also has a major section on Congressional versus Executive War Power (covering the Gulf Wars, Balkans, Libya and Syria) and the Government’s ability to act in a crisis as reflected in Milligan, Korematsu, Youngstown Sheet and Pandemic litigation.

New to this edition are important recent cases, including Humanitarian Law Project v. Holder, Jones, Riley, Carpenter, Rigmaiden, Cotterman, Aldawsari, and Mohamud. Many of these relate to foreign and domestic electronic surveillance. There are new sections on border and immigration law and on the biological hazard threat, as well as updated sections on war powers to cover President Obama’s and President Trump’s actions in the Middle East and on utilization of drones and satellites against U.S. citizens.