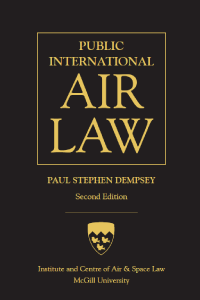 Air law has evolved and grown along with the aviation industry. Today, there is an elaborate and wide-ranging collection of international conventions, treaties, and air transport agreements, as well as a highly developed body of domestic law having an international application that governs air transport. Behind the glamour of air transportation is a myriad of issues relating to aviation security, aviation safety, the use of airports and air navigation services, as well as environmental concerns that are at play and that require extensive analysis and study.Since the first edition of the book in 2008, there have been significant developments in aviation law, public policy, and technology. Several major diplomatic conferences have been convened by the International Civil Aviation Organization (ICAO), and these conferences have drafted major treaties. Additionally, in 2016, the ICAO General Assembly adopted a Carbon Offsetting and Reduction Scheme for International Aviation (CORSIA). New technologies also now capture the attention of Air Law, including Unmanned Aerial Vehicles (drones) and space transportation.Public International Air Law, Second Edition is a must not only for law students but also for practicing lawyers, government officials and policymakers, airlines, insurers, and members of the public who are interested in air law.