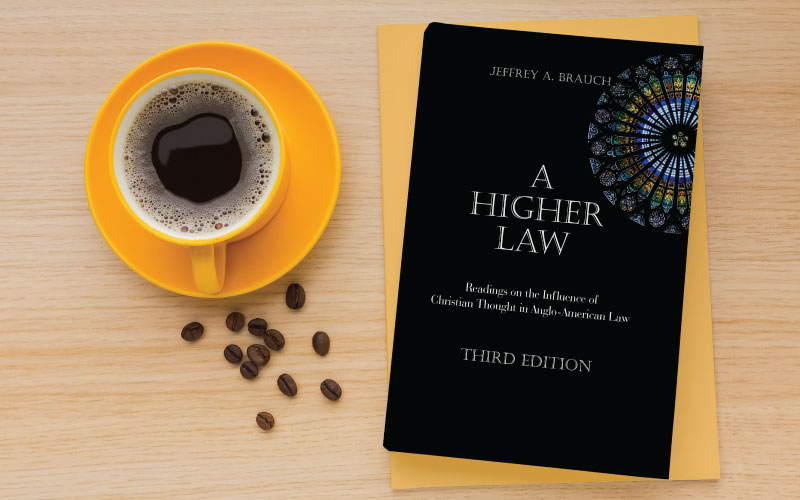 Today we are featuring a guest post by Jeffrey A. Brauch, author of the acclaimed title A Higher Law: Readings on the Influence of Christian Thought in Anglo-American Law, 3rd Edition. 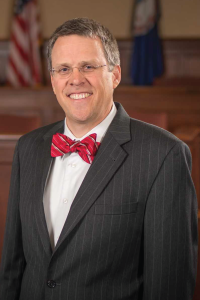 Jeff Brauch has served as a professor at Regent University School of Law since 1994. From 2000 to 2015, he served as the law school’s dean.

Brauch received his B.A. with distinction from the University of Wisconsin and his J.D. with honors from the University of Chicago Law School. After graduating from law school, Brauch was a law clerk for Justice William Callow of the Wisconsin Supreme Court. He then worked for five years as an associate with the Milwaukee law firm Quarles & Brady, where he specialized in commercial litigation.

Brauch was drawn to teaching and to Regent University by Regent’s mission that calls the faculty to both teach law with excellence and to do so from a Christian perspective. In particular, the mission charges faculty to integrate biblical principles with the substance of the law and to train and mentor students to apply Christian principles to the way they live and practice law. Brauch was led to compile A Higher Law as part of carrying out that mission.

Brauch and his wife Becky are the parents of four adult children and have four grandchildren. He loves history, the music of Beethoven, and the Green Bay Packers–not necessarily in that order.

About A Higher Law: Readings on the Influence of Christian Thought in Anglo-American Law

Brauch remarks, “A Higher Law has always been tied closely to the classroom. For 26 years, I have taught law at Regent University School of Law in Virginia Beach, Virginia. Regent is a Christian law school that intentionally seeks to bring a faith perspective to law study and practice.
The first-year curriculum at Regent looks a lot like that at other American law schools, all of which teach Contracts, Property, Civil Procedure, Torts, and Legal Writing. In these courses, students learn core legal concepts: What is a contract? What is the remedy for contract breach? What rules determine who owns property?

But one Regent course is unique. In Foundations of Law, Regent law students reflect and ask more profound, more foundational questions: What is law? What is its purpose? Are there fundamental or even eternal principles of justice that should shape our legal system? The course explores Christian approaches to these questions—for example, natural law theory—and approaches that differ from or even reject a Christian approach.

In the past century and a half, our answers to these foundational questions have changed a lot. For most of the last millennium, the dominant legal theory was one that believed in the existence of a higher law–a transcendent law by which human law could be evaluated and through which justice could be attained. More recently, though, our view of the world changed. We became skeptical. We became skeptical about whether there really is a higher law or such a thing as true justice. In many ways, we began to view law as merely a means to exert power or to accomplish specific social welfare goals.

A Higher Law tells the story of this change in the way we view law and its purpose. It does so mainly through the words of others. It consists of excerpts from books, articles, and cases written by some of the people who have most shaped the Anglo-American legal system. The view of the world that was foundational to the development of Anglo-American law, particularly the common law, is described by the common law’s most brilliant lawyers and judges: Henry de Bracton, Sir Edward Coke, and William Blackstone. The last century’s great legal movements are described by the leading thinkers of those movements in works that explain and defend those movements. The book contains excerpts from the works of the world’s most outstanding legal minds: Thomas Aquinas, Oliver Wendell Holmes, Karl Llewellyn, Richard Posner, and many others.

The book tells its story in three parts.

Part A traces the shift in thinking primarily at a philosophical level. It reveals how our thinking about the world and the law has changed from medieval times to the present day. It begins by setting forth several higher law views and how that higher law should affect human law. It then illustrates the shift toward skepticism of the existence of a higher law that has taken place. It introduces influential legal philosophies that have largely replaced higher law thinking today: positivism, realism, law and economics, critical legal studies, critical race theory, and feminist jurisprudence.

Part B steps back and explores how the legal ideas from part A have influenced specific legal institutions and doctrines. It addresses several contemporary issues in which there is a clash over legal philosophy. The issues vary widely, ranging from criminal punishment to human rights and biotechnology.

Part C addresses whether the higher law—if it even exists—has any relevance to human law today. It contains excerpts from books and articles by thinkers who believe in a higher law but disagree about whether and how it might apply in our 21st-century pluralistic society.

I updated A Higher Law in 2019 mainly to ensure that the book addresses important current cultural trends. So, the chapter on human responsibility and criminal guilt now includes a focus on the impact of post-traumatic stress disorder on large numbers of service members returning from Iraq and Afghanistan. Similarly, the chapter on critical race theory has been updated to highlight the debate on race relations that has occurred since the 2012 shooting of black teenager Trayvon Martin and the beginning of the Black Lives Matter movement.

I expanded some chapters. Rights–whether constitutional or human–play a more prominent role than ever in public discussion and courtrooms. Thus, coverage of constitutional rights and human rights has grown, and the book now includes recent and high-profile cases that reflect how crucial legal philosophy is to how those cases were resolved.

One chapter is wholly new. Chapter 8 gathers readings from a wide variety of perspectives about an area of great and growing importance today: the use of biotechnologies that can alter the human genome for generations to come.

While A Higher Law has always facilitated debate and discussion in a class setting, it is also useful for anyone who wants to go below the surface and see the way changes in legal thinking cause changes in the law itself. It is also valuable for those who want to see how law can be more than a mere matter of procedure and technique–and instead want it to pursue true justice.” 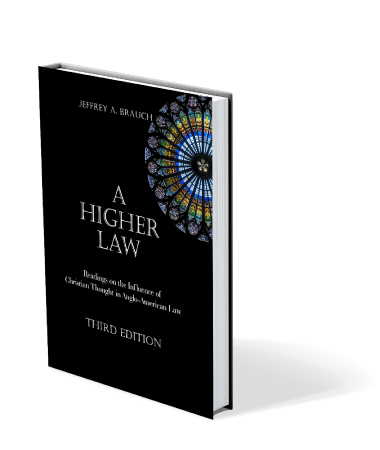