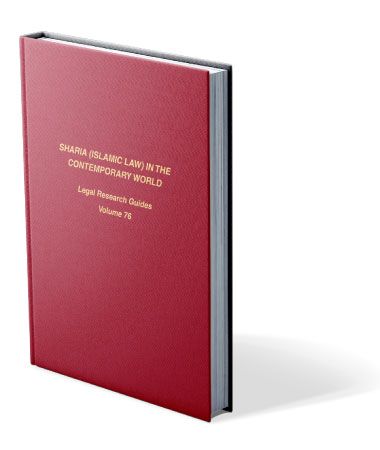 Sharia (Islamic Law) is one of the most established and controversial legal systems in the world. The literal meaning of Sharia is “the way to the watering hole” and is Islam’s prescribed way (or set of guidelines) for living morally and achieving salvation. Based on the Koran and the Sunnah—the sayings and traditions of the Prophet Muhammad—Islamic law is the result of scholars’ efforts over centuries—to translate God’s will into a legal system of mandatory beliefs and behavior.

Because Sharia governs the lives of 900 million people worldwide, this legal system is the cornerstone of the national law of several nations, and Sharia is playing an increasingly important role in international business transactions, banking/finance, and various aspects of personal law in many nations. Furthermore, many Americans have an erroneous or incomplete view of Sharia, and sometimes these views give rise to counterproductive ideas such as Islamophobia.

This research guide presents historical and doctrinal perspectives required to understand the development of Islamic jurisprudence and its application. In addition to its historical treatment, this work also covers selected current issues of significance. The first part provides background information on Sharia (including its origins and history, what it consists of, and its methodology) and an introduction to many of the issues that Sharia addresses. The second part contains a concise yet comprehensive annotated bibliography of academic legal literature to assist those researching Sharia. Individual sections cover primary sources (including statutes and case law), while subsequent chapters deal with secondary materials such as journals, treatises, and reference works on substantive areas of law. The goal of this work is to enhance the understanding of Islamic law; in so doing, it explains the complexity of reconciling law with custom, and religious laws with secular laws.

Christopher Anglim is a Reference Librarian at the University of the District of Columbia & American University Washington College of Law, Pence Law Library with a JD, MBA, MPA, MLS, and an MA in History. In addition, he is in the process of completing his Masters in Homeland Security (MHS). Anglim has focused on achieving an effective balance between individual liberties and reasonable protections against terrorism and other national security threats. He is active in organizations such as the Center of Muslim-Christian Understanding at Georgetown University. He has written several other books, articles, and papers on issues of law, political science, government, religion, and business. Anglim is also a previous winner of the AALL Joseph L. Andrews Bibliographic Award for his title Joined in Common Enterprise: A Bibliography on the Origins of Early Anglo-American Partnership Law.